In 1960, a lawyer named Harold Harney set up shop on a small island in the Caribbean. It was the only legal practice on the island of Tortola, and the first of its kind that the British Virgin Islands had ever seen. This is how Harneys, today a law firm with a sister fiduciary business, employing more than 500 people in over 10 locations around the world, came to be.

Since its founding, Harneys has remained at the forefront of the development of offshore jurisprudence and consistently advises on legislative developments such as the BVI’s landmark International Business Companies Act, the Limited Partnership Act, and the Economic Substance (Companies and Limited Partnerships) Act, to name a few. In 1974, Harneys’ associated corporate and private wealth services business, Harneys Fiduciary, was established to provide clients with integrated legal and administrative support. Sixty years later, Harneys stands on the global stage as a leading law firm, consistently listed, awarded and ranked amongst the best and brightest in the offshore industry.

Chairman Peter Tarn said: “When I joined the firm in 1997, there were around 15 lawyers in the BVI and no foreign offices, which is chalk and cheese compared to our global offering today. It is impossible for me to consider Harneys’ history without thinking about the contributions of Harold Harney, Michael Riegels, Neville Westwood, Richard Peters and Lewis Hunte to the development of the offshore world and I am delighted that their devotion towards pushing legislation forward continues at Harneys today.”

By the late 90s, Harneys’ lone BVI office had grown to 18 lawyers, with a litigation team of only two. It wasn’t until 2002 that Harneys would expand outside the BVI, opening its London office, closely followed by the Hong Kong office in 2005. Since then, the Harneys network has become one of the largest among offshore law firms, with over 170 lawyers located in major financial centres across Europe, Asia, the Americas and the Caribbean.

In recognition of the fifteenth anniversary of the firm’s Hong Kong office, Asia Managing Partner Ian Mann commented: “The office has grown significantly since its launch in 2005. We are excited to expand into new areas, and strive to be a growing part of the region, including the Greater Bay Area where new tech and innovative businesses are expanding.”

In 2000, the firm instituted the first legal training programme of its kind in the BVI for newly qualified lawyers. Following its inception, the programme has graduated more than two dozen lawyers, many of whom have gone on to succeed not only at Harneys, but at other law firms and in the judiciary.

BVI Managing Partner Tanya Cassie-Parker said: “I’ve been with Harneys since 1999 and it fills me with great pride to assume a supportive and mentorship role to the young talent that we have coming up in the firm. I was a beneficiary of mentorship when I joined Harneys, and I am pleased to see the cycle continuing. I think that’s a legacy we have every right to be proud of.”

In December 2018, new legislation was passed by the BVI government that introduced increased economic substance requirements. From this, Harneys’ latest LegalTech product was born: the Economic Substance Classification Solution. The automated classification solution provides tailored real-time legal advice, generated instantly after completion of an interactive questionnaire. The solution is currently shortlisted for Legal Week’s International Law Firm Innovation Award, with the winner to be announced in October 2020.

Chief Operating Officer Felice Swapp commented: “It’s fascinating how our mind-set has evolved to think well beyond conventional legal services. We have been able to harness creativity and innovation to disrupt the market with some revolutionary products such as our client onboarding app, a pioneering service in the customer due diligence space. There’s something really exciting about that; the talent we attract and retain at Harneys enables us to succeed and explore outside the traditional law firm model.”

As well as pioneering in the LegalTech field, Harneys is also leading the way on diversity in the offshore industry. More than a third of partners at Harneys are female and it was recognised as “the most diverse offshore law firm” by The Lawyer in its 2019 offshore report.

In addition to developing the legal industry, Harneys extends beyond just business, investing in its community, both locally and globally. With a decades-long professional and personal connection to the BVI, Harneys offices across the globe contributed to rebuilding efforts after Hurricanes Irma and Maria, donating both time and financial resources.

Tarn added: “Our resilience as a firm was highlighted during Hurricane Irma in 2017; despite the devastating impact, I was incredibly proud of the way the firm came together and looked after each other whilst helping rebuild in our community. Harneys was grown, and has its home, in the BVI. We are unique in that – a small legal practice in the BVI has gone global. That is an extraordinary thing and I am honoured to be a part of it.”

Watch the video below to see our highlights from the past 60 years set against the backdrop of world events. 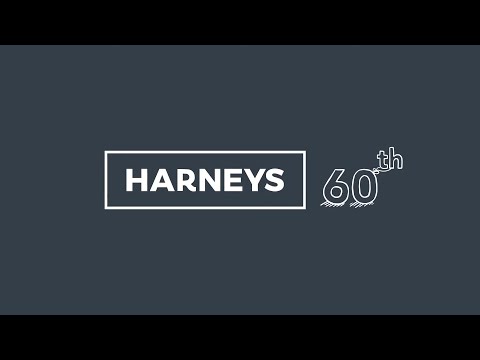 To mark Harneys’ Diamond Jubilee, a dedicated history section has been added to the firm’s website atharneys.com/history.

Insights
Harneys throughout the years
Other
History